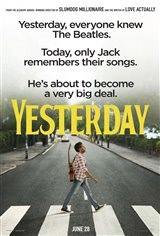 Struggling musician Jack Malik (Himesh Patel) works part time at a warehouse, stocking shelves. He hates his job, but has just about decided to give up his musical career and go back to teaching. As he's riding his bicycle home after a gig, the world suffers a 12-second blackout, during which Jack, unable to see, rides into the path of a bus. He survives, but soon discovers slight changes in the world after waking up. The biggest change for him is that no one seems to know of The Beatles, after he plays one of their hit songs for his friends, including his best friend, Ellie (Lily James).

He races home and finds no notice of them on the internet, so he sets about writing down the lyrics for all the songs he can remember. When he begins to play their music in public, he soon attracts attention, including from Ed Sheeran, who hires him as his opening act. As Jack's star rises higher and higher, his fame explodes. However, the higher his star rises, the further he finds himself separated from Ellie, the one friend who believed in him his whole life.