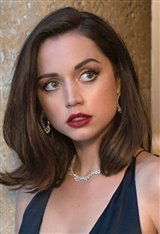 By the age of 27, Ana de Armas had been acting for almost half her life. The Havana-born Cuban actress began studying acting at the National Theater School at the age of 14. She landed her first film role two years later, starring in Una rosa de Francia (2006) directed by Manuel Gutiérrez Aragón. She then starred in two films in 2007: Madrigal directed by Fernando Pérez and El edén perdido directed by Manuel Estudillo. Her major break came when she moved to Spain and landed a recurring role as... See All