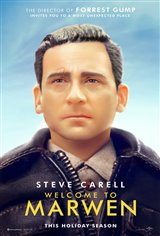 Mark Hogancamp (Steve Carell), a WWII illustrator, is brutally attacked by five men one night for no reason, and left for dead. He miraculously survives, but in addition to his numerous injuries, all of his memories are gone. As Mark says, "They kicked every memory I ever had out of my head." So as he goes through intensive physical and emotional therapy, he also creates a world populated by dolls, who tell his story.

Putting together pieces from his old and new life, Mark meticulously creates a wondrous town in which he can heal and be heroic. As he builds an astonishing art installation—which includes the most powerful women he knows, who protect the doll Mark from the bad guys—he draws strength from his fantasy world, in order to be able to move on with his real life, which includes night terrors and Mark's worst fear of all—facing his attackers in court.