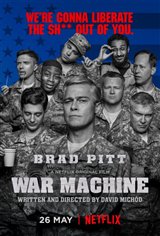 A four-star U.S. general (Brad Pitt) takes hold of NATO forces in war-torn Afghanistan and couldn't be more confident about his position. However, the complexity of the role becomes overwhelming when a journalist's exposé threatens to dismantle his control.

Inspired by the book The Operators: The Wild & Terrifying Inside Story Of America's War In Afghanistan by the late journalist Michael Hastings.