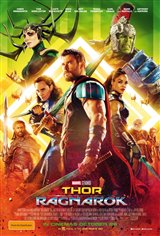 Thor (Chris Hemsworth) is imprisoned, but gets free and returns to Asgard, where he finds none other than his brother, Loki (Tom Hiddleston). The two go on a search for their father, Odin (Anthony Hopkins), but when Thor's  mighty hammer is smashed to bits, he finds himself captured and taken to the far side of the universe to the planet Sakaar.

He's desperate to get home to Asgard before Hela (Cate Blanchett), the Goddess of Death, can wreak destruction on his home and end Asgardian civilization. However, Thor is first forced to engage in a gladiatorial contest arranged by the Grandmaster (Jeff Goldblum), against his former ally and fellow Avenger, the Incredible Hulk (Mark Ruffalo), who hasn't lost a fight yet.