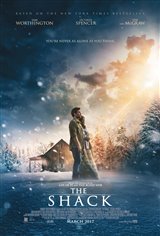 When Mack Philips (Sam Worthington) takes three of his children on a camping trip, his youngest daughter, Missy, goes missing. Evidence discovered in an abandoned shack leads authorities to believe she was kidnapped and murdered by a serial killer, although her body isn't found.

Four years later, Mack receives a note in his mailbox asking him to return to the shack. The note is signed from "Papa" and Mack suspects it could be from God, whom his wife Nan (Radha Mitchell) always refers to as "Papa." Against his better judgment, he accepts the invitation and finds something there that will change his life forever.