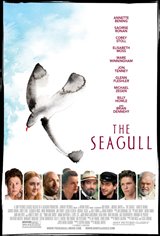 An aging actress named Irina Arkidana (Annette Bening) goes each summer for visits to her brother Sorin's (Brian Dennehy) country estate. On one occasion, she brings Boris Trigorin (Corey Stoll), a successful novelist, with her.

Nina (Saoirse Ronin), a young girl from a neighboring estate who wants to be an actress herself, falls for Trigorin, ignoring Irina's aspiring playwright son Konstantin (Billy Howle), who is in love with her. Despondent because Nina can't return his love and because his mother has rejected and mocked him for years, Konstantin is suicidal, while Trigorin toys with Nina's affections.

Based on the play by Anton Chekhov.