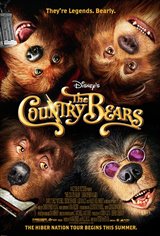 Like other celebrated rock-and-roll groups, the members of the legendary group The Country Bears – brothers Ted and Fred Bedderhead, Tennessee O'Neal, and Zeb Zoober – were torn apart by the perils of their own success: ego, jealousy, and a little too much honey.

Eleven-year-old Beary Barrington is an eager fan who goes on a quest to convince the bitter ex-members of the rock band to put aside their differences and perform a benefit concert to save Country Bear Hall, the legendary venue where the band got its start.