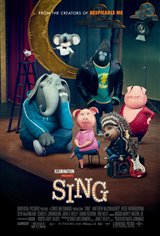 In a world populated by human-like animals, a koala named Buster Moon (voiced by Matthew McConaughey) runs a beloved, once-grand theater, that has fallen on hard times. With the help of his sheep friend Eddie (John C. Reilly), Buster decides to raise money to keep the theater from being shut down, and holds the world's greatest singing competition.