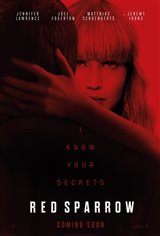 Dominika Egorova (Jennifer Lawrence) is a ballerina with the Bolshoi Ballet when her career is cut short by an on-stage collision. She lives with her infirm mother (Joely Richardson) in a modest apartment, but when her career ends, her health insurance is revoked, which means her mother will no longer have access to a part-time nurse.

Dominika's Uncle Vanya (Matthias Schoenaerts), who's the deputy director of Russia's external intelligence agency, offers to help her out, if she agrees to a mission. During the mission, Dominika witnesses a murder, which means she will be killed unless she agrees to train become a "Sparrow" — a spy and seductress who works for Russia.

Following training, she is assigned to meet CIA agent Nate Nash (Joel Edgerton), who liaises regularly with an important Russian mole. Her task is to find out who the mole is, but when Dominika meets Nate, she falls for him and considers becoming a double agent. However, this puts not only their lives in jeopardy, but it places others in danger as well.

Based on the 2013 novel by Jason Matthews.