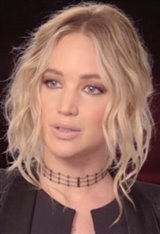 Born and raised in Louisville, Kentucky, Jennifer Lawrence began acting in film and television at the age of 14. In 2010, she was named one of the New York Times' "50 People to Watch." Early TV credits include guest appearances on Monk, Cold Case and Medium. She went on to play a regular role on the third season of the TBS series The Bill Engvall Show. In 2008 she played opposite Charlize Theron and Kim Basinger in Guillermo Arriaga's directorial debut The Burning Plain. The film premiered at... See All