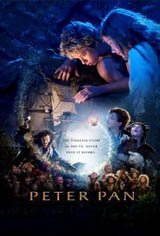 Watch Trailer
On a chilly night in buttoned-up Edwardian London, Wendy Darling (Rachel Hurd-Wood) mesmerizes her younger brothers with tales of swordplay, swashbuckling and Captain Hook, the legendary pirate who fears nothing but a ticking clock. But a clock is ticking for Wendy, too. Her father has decreed that it's time for her to grow up. After tonight, no more stories. She's to be groomed for womanhood and marriage by strict Aunt Millicent (Lynn Redgrave). Unknown to the Darlings, Peter Pan (Jeremy Sumpter) loves Wendy's stories, too, and travels a great distance to hear them. His appearance in their nursery that night, along with a jealous little fairy called Tinker Bell (Ludivine Sagnier), triggers an awfully big adventure for Wendy and her brothers. Following him out the window like a small flock of birds, the children swoop over London's moonlit rooftops, through a galaxy of radiant planets and stars, to the magical Neverland, where they begin an exhilarating new life free of grown-up rules with Peter and the Lost Boys in their secret underground home.

Based on the classic story by J.M. Barrie.