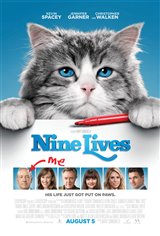 Tom Brand (Kevin Spacey), a billionaire businessman who is one of the most powerful men in the world, has very little time for his family. With time running out to choose a present for his daughter for her 11th birthday, he stops off to get her a cat like she requested, despite the fact that he hates cats.

Back in the car on the way to his daughter's birthday party, he has an accident and wakes up in the body of the cat, who is named Mr. Fuzzypants. Subjected to humiliations such as bows on his head and baths thanks to his daughter, who loves the grumpy cat, Brand is told by the mystical pet store owner, Felix Perkins (Christopher Walken), from whom he bought Mr. Fuzzypants, that until he makes things right with his family, he'll remain a cat.