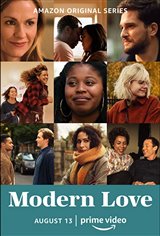 In the first season, we get eight unique stories about the joys and tribulations of love, each inspired by a real-life personal essay from the New York Times column "Modern Love."

For example, an elderly couple (Jane Alexander, James Saito) who meet while running; a young man and woman (Sofia Boutella, John Gallagher Jr.) who meet when he's stood up at a restaurant; a married couple (Tina Fey, John Slattery) struggle with their connection as their children are growing up and getting ready to the leave the nest; Maggie (Cristin Milioti) lives in an apartment building with a protective doorman (Laurentiu Possa); and a beautiful woman (Anne Hathaway) tries to keep a relationship going while struggling with bipolar disorder.

In the second season, selected stories include a married woman (Anna Paquin) who struggles with her husband's affair, while a soldier (Garrett Hedlund) comes to realize his wife is having an affair with the husband of the aforesaid woman. An Irish woman (Minnie Driver) is reluctant to part with her late husband's car and strangers Michael (Kit Harington) and Paula (Lucy Boynton) meet on a train just before the pandemic forces a lockdown.