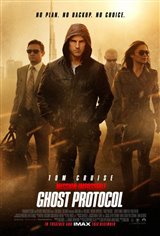 When a terrorist bombing destroys the Kremlin while IMG agent Ethan Hunt (Tom Cruise) is carrying out a mission in Moscow, the IMF is implicated and shut down. The Russian government calls the attack "an undeclared act of war," which prompts the United States government to put in place a black operation called "Ghost Protocol."

Hunt and his rogue new team (Jeremy Renner, Paula Patton and Simon Pegg) go undercover to locate who is connected to the Moscow bombing in an effort to clear the organization's name.