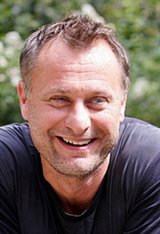 Born in Stockholm, Swedish actor Michael Nyqvist was adopted from an orphanage as a baby. He spent much of his youth playing sports such as ice hockey and football. He then spent his senior year of high school in Omaha, Nebraska as an exchange student. While there, he took his first acting classes, and his first role was a school adaptation of Arthur Miller’s Death of a Salesman. Upon returning to Sweden his interest turned to ballet, and he was accepted to ballet school. He eventually quit... See All