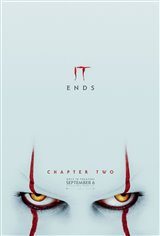 It's been 27 years since shape-shifting predator Pennywise (Bill Skarsgård) terrorized the Losers' Club. The now-adults have moved on from Derry, Maine: Richie (Bill Hader) has become a stand-up comic, Bill (James McAvoy) is a successful novelist in Hollywood, Ben (Jay Ryan) is now a wealthy architect, Stanley (Andy Bean) is a troubled accountant, Bev is in an abusive relationship with her husband and Eddie (James Ransone) is in risk assessment. Mike (Isaiah Mustafa) is the only one of the group who stayed in Derry, while the others moved on with their lives.

When Pennywise mysteriously returns to the little town of Derry, Mike calls each one of the Losers back to Derry. When they were young, they'd made a blood oath that if Pennywise would return, they would too, to put a stop to him. However, they have all suppressed the supernatural horror they experienced as kids. They first have to remember their childhood before attempting to face Pennywise, who is now more menacing than ever.