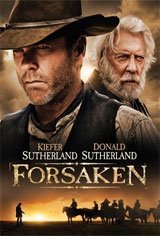 Civil War veteran and quick-draw gunslinger John Henry Clayton (Kiefer Sutherland) returns to his hometown after years of wandering and making a name for himself.

Tired of his years of violence, John Henry just wants to put away his guns for good. John Henry's father, the Reverend William Clayton (Donald Sutherland), condemns his son's past and doesn't believe he's ready to reform.

When a murderous gang begins to take ownership of local properties — including that of John Henry's long-lost love, Mary Alice (Demi Moore) — John Henry is faced with a dilemma. Is it better to turn the other cheek or to use his deadly talents to get rid of the outlaws — led by powerful landlord and saloon keeper McCurdy (Brian Cox).