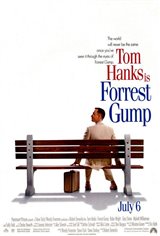 Despite Forrest's (Hanks) low IQ, he is not your average guy. Learning early on from his mother (Sally Field) that "life is like a box of chocolates, you never know what you're gonna get," Gump, without trying, stumbles upon some exciting events. He teaches Elvis Presley to dance, becomes a football star, meets John F. Kennedy, serves with honor in Vietnam with Lieutenant Dan (Gary Sinise), meets Lyndon Johnson, speaks at an anti-war rally at the Washington Monument, defeats the Chinese national team in table tennis, meets Richard Nixon, discovers the break-in at the Watergate, opens a profitable shrimping business with his old army pal (Mykelti Williamson), becomes an original investor in Apple Computers, and decides to run back and forth across the country for several years.

Meanwhile, as the remarkable parade of his life goes by, Forrest never forgets Jenny (Robin Wright), the girl he loved as a boy, who makes her own journey through the turbulence of the 1960s and 1970s that is far more troubled than the path Forrest happens upon.