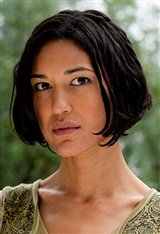 A native of Jamaica Plain, Massachusetts, Julia Jones began working in commercials, regional, and community theatre when she was eight. She also performed regularly in Boston Ballet's production of The Nutcracker. After high school, Julia moved to New York to attend Columbia University, where she graduated with a degree in English, and began modeling internationally. During this time, she appeared in ads for Levi's, Esprit, and Polo Ralph Lauren.

On film, she was first seen in The Look, a dark comedy that premiered in 2003 at the Tribeca Film Festival. Her other credits include Rick Schroder's directorial debut Black Cloud opposite Schroder and Tim McGraw, The Reckoning, the Quentin Tarantino-produced Hell Ride, Three Priests, and California Indian. On television, Jones had a recurring role as Dr. Kaya Montoya on ER in its final season.

Most recently, Julia played the title role in the Canadian-filmed Angelique's Isle (2019), about a young native woman who gets stranded with her new husband in the remote north during a harsh winter.