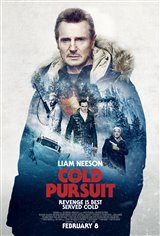 Nelson "Nels" Coxman (Liam Neeson), a snowplow operator in a small Colorado ski town in the Rocky Mountains, is named Citizen of the Year. However, his quiet life with his wife (Laura Dern) takes a turn when their son is murdered by a drug cartel. Nels sets out to get revenge on those responsible, but inadvertently starts a gang war that threatens to destroy the town.

A remake of the 2014 Norwegian film In Order of Disappearance (Kraftidioten) starring Stellan Skarsgård, also directed by Hans Petter Moland.