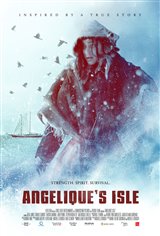 During the summer of 1845, Angelique (Julia Jones), an 18-year-old Indigenous woman, and her voyageur husband Charlie (Charlie Carrick), set out in search of copper ore with Detroit business man Cyrus Mendenhall (Aden Young) and his crew.

They discover a whole boulder full of copper on Lake Superior's Isle Royale near Thunder Bay. However, because it's too large to move, Charlie agrees to stay to protect the claim with Angelique, while the Americans raise the funds back home to return with equipment that will enable them to move the boulder. They're due to be back in two weeks, but months go by and summer turns into a bitter Northern Ontario winter. Angelique and Charlie are left without winter clothing or enough provisions to survive.

They eat bark when Charlie proves to be unable to hunt, but as they starve, they begin to hallucinate. Angelique, whose time at a residential school led to her becoming a devout Christian, struggles with her faith and finally discovers she has to rely on the traditional teachings she received from her grandmother (Tantoo Cardinal) in order to survive the harsh winter.