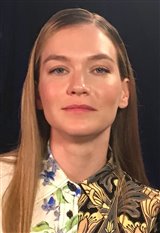 Raised in Toronto, Ontario, Canuck actress Hannah Gross was born with acting in her blood, as the daughter of renowned Canadian actor and director Paul Gross and Slings and Arrows star Martha Burns. Despite her parents' reluctance towards an "acting dynasty," as well as being painfully shy as a child, Hannah always knew performing was her true calling. It was a dream that blossomed when she first saw Shakespeare in Love. "I wanted to be Gwyneth Paltrow," she admitted in an interview with The Toronto Star.

Although she made her feature film debut when she was just 10 years old in her father's cult comedy classic Men with Brooms (2002), Hannah only began showing a real interest in acting when she was in her junior year of high school. She decided to attend New York University's Tisch School of the Arts, where she earned a Bachelor of Fine Arts in Theater, with a minor in Religious Studies. During her time in New York City, Hannah made a name for herself at the Stella Adler Studio of Acting by playing Katie in the 2010 adaptation of Sharon Pollock's 1984 play Doc, and directing a 2012 adaptation of Tennessee Williams' A Streetcar Named Desire.

In 2012, Hannah met director Matthew Porterfield at an afterparty for a screening of his previous film Putty Hill (2010). Impressed by her natural ability, he would go on to cast her in his next project I Used to Be Darker (2013), marking her first leading (and speaking) role on the big screen. This opportunity would kick start her career, and over the next couple of years, she landed parts in another four feature films — the dramedy Uncertain Terms (2014), the romantic drama Christmas, Again (2014), the drama Valedictorian (2015), and the independent dramedy Stinking Heaven (2015).

While mainstream success still eluded the talented young actress, she continued to find steady work in short films such as the mystery drama Beach Week (2015) and the satire Dramatic Relationships (2016).

In 2016, Hannah earned her biggest movie role to date alongside Oscar-nominee Catherine Keener in the Canadian-Irish drama film Unless (2016). In it she starred as Norah, a homeless college dropout struggling to maintain a healthy relationship with her writer mother Reta (Keener).

In 2018 Hannah was busy on television, playing recurring roles on the anthology series The Sinner for USA Network, and Etta Pryce in Shudder's original series Deadwax.

After playing Young Penny in Joker (2019) starring Joaquin Phoenix in the title role, she played a starring role as Laure in the Canadian drama Disappearance at Clifton Hill (2019), alongside Tuppence Middleton.