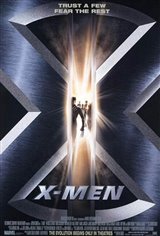 Adapted from the most popular Marvel comics series of the 1990s, the X-Men live on an alternate Earth where unusual children are born with twists to their genetic code. This "X-factor" allows the children to perform extraordinary feats, such as flight, telekinetics and the ability to shoot laser beams from their eyes. Unfortunately, humans fear and revile the mutants.

Professor Charles Xavier (Stewart) gathers mutants to help fight for his dream (a world where the mutant minority and human majority can live together in harmony) to be judged not by the extraordinary powers they possess, but by their character. He calls this team - which includes Storm, Cyclops, Jean Grey, Wolverine and Rogue - the X-Men.

On the other hand, an old friend of Charles, named Eric Magnus (McKellen) does not share the professor's dream. Magnus, a.k.a. Magneto, believes that the only way peace can be obtained is by conquering the human species. And with his team of evil mutants - Mystique, Sabertooth and Toad - he intends to follow through with his plan.

With this threat approaching, the only hope Xavier's dream has is to prevent Magneto from achieving his goal.