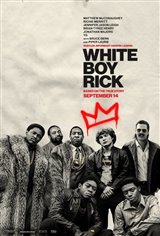 Richard Wershe, known on the streets as White Boy Rick, lived in Detroit, where he worked as a drug dealer. What his criminal pals didn't know was that at age 14, he had been recruited to be an undercover informant for the Detroit police.

The police provided him with a fake ID that said he was 21 so he could travel to Las Vegas and to Miami to do drug deals in order to bring down drug lords in those cities as well. By 16, he was dating the Mayor Coleman Young's niece, who was five years older and married to Eastside drug kingpin Johnny Curry. Having served for two years as an informant, Rick decided to stop helping police, which would have severe repercussions for the teen.