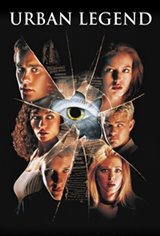 Alligators in the Manhattan sewers, the infamous poodle in the microwave, the friend of a friend of a friend who got this great deal on a used car because someone died in it and nothing would take the stench of death away -- it's all true, right? I mean, no one makes this stuff up, it can't just be some urban legend that gets passed around, can it?

Well, okay, maybe they could just be urban legends. In this film, students at New England's Pendleton College have their own urban legend -- 30 years ago, a demented professor killed six students and then commited suicide in Stanley Hall.

But when a real series of strange deaths begin occurring on campus, one student -- yeah, the really cute one -- suspects they're murders based on urban legends and soon realizes she's the next number in the killer's body count.