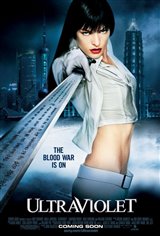 In the late 21st Century, a vampire-like disease has ravaged the world, creating a population of humans with boosted intelligence, speed and stamina. The "Hemophages" are targeted for destruction by the uninfected humans, leading to a worldwide civil war.

Caught in the middle of this battle is Violet (Milla Jovovich), an infected woman who finds herself protecting a nine-year old boy (Cameron Bright) marked for death by the government who believe him to be a threat to the healthy population.