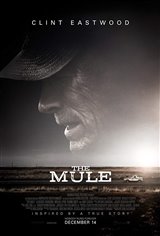 Earl Stone (Clint Eastwood) knows he's been a terrible husband and father to his ex-wife Mary (Dianne Wiest) and his daughter, Iris (Alison Eastwood). Now in his 80s, he's facing foreclosure of his business. When he's offered a job that just requires some driving, Earl jumps at the chance, but what he doesn't know at first is that he'll be transporting drugs for a Mexican cartel.

He does so well that he's asked to do more and more runs, with increased loads of cargo. But he eventually attracts the attention of a DEA agent named Colin Bates (Bradley Cooper). As Earl struggles with his past mistakes, and the law and the cartel's enforcers begin to catch up to him, he wonders if he’ll have time to right those wrongs.