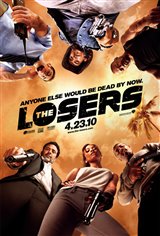 An explosive action tale of betrayal and revenge, The Losers centers around the members of an elite Special Forces unit sent to the Bolivian jungle on a search and destroy mission. But the team—Clay, Jensen, Roque, Pooch and Cougar—soon find that they have become the target of a deadly double cross, instigated from the inside by a powerful enemy known only as Max.

Making good use of the fact that they are now presumed dead, the group goes deep undercover in a dangerous plot to clear their names and even the score with Max. They are joined by the mysterious Aisha, a beautiful operative with her own agenda, who is more than capable of scoring a few points of her own. Working together, when they're not arguing amongst themselves, they have to stay one step ahead of the globetrotting Max—a ruthless man bent on embroiling the world in a new high-tech global war for his own benefit. If they can take down Max and save the world at the same time, it'll be a win-win for the team now known as The Losers.