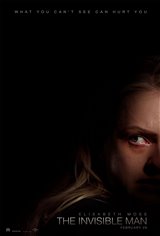 Cecilia (Elisabeth Moss) has an abusive boyfriend, Adrian, who's a sociopath. He controls every aspect of her life and she's terrified of him. She finally decides to run away to save her life. Soon after, she receives word from Adrian's attorney that Adrian has committed suicide and left her money. However, Cecilia doesn't believe Adrian would ever kill himself.

Although her friends tell Cecilia she doesn't have to be afraid of Adrian anymore, she remembers he warned her that wherever she went, he would find her. He told her that at some point in the future he would be able to walk right up to her, and she wouldn't be able to see him. She soon discovers strange things happening, but can't see what is causing it. She believes Adrian isn't dead, but as he promised, he has discovered a way to be invisible. Cecilia tries to tell her friends, but they don't believe her and worry she's going crazy.

Based on the novel by H.G. Wells.