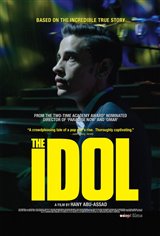 The Idol focuses on the childhood of Mohamad Assaf, a famous winner of the TV talent show Arab Idol, which is the Arab world's answer to American Idol. Mohamad Assaf (Qais Atallah), 10, and his twelve-year-old sister Nour (Hiba Atallah) are both obsessed with music. After scheming to purchase instruments, they start a band with their friends Ashraf (Ahmad Qassim) and Omar (Abdelkarim Abu Baraka).

It's Nour who first realizes that her brother is a talented singer. She encourages the band to practice endlessly and dream big, despite the reality of life in Gaza and urges Mohamad to share his gift with the world.