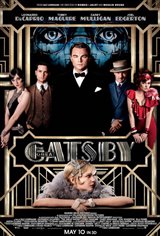 Nick Carraway (Tobey Maguire), a young man from Minnesota, moves to New York to learn about the bond business. He rents a house in the swanky West Egg district of Long Island. He eventually meets his neighbor Jay Gatsby (Leonardo DiCaprio) and gets caught up in his world of extravagant parties and people.

Based on the novel by F. Scott Fitzgerald, this story deals with the allure of fame and fortune, as well as the unbreakable bond of first love.