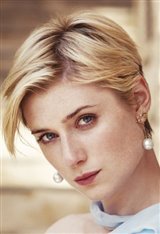 Born in Paris, France, Elizabeth Debicki is an Australian actress best known for roles in films such as The Great Gatsby (2013), Everest (2015), and Guardians of the Galaxy Vol. 2 (2017). Her Polish father and Australian/Irish mother were both professional ballet dancers. When Elizabeth was five, her family (Elizabeth also has a younger brother and sister) moved to Australia, where she followed in her parents' footsteps by pursuing an interest in ballet, before finally deciding on a career in... See All