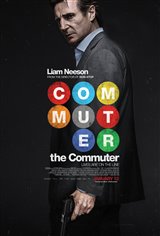 Michael MacCauley (Liam Neeson) is a retired NYPD detective turned insurance salesman who takes the Hudson Line train on his daily commute to New York City from the picturesque suburb where he lives with his wife, Karen (Elizabeth McGovern) and son Danny (Dean-Charles Chapman).

MacCauley discovers he's been laid off from his job five years before he was due to retire, just as he's struggling with how to pay Danny's college tuition. Just after he boards the train at Grand Central Station on his way home, he's approached by a stranger named Joanna (Vera Farmiga), who tells him if he can identity someone named Prynne who isn't a regular commuter and plant a GPS on that person, he'll be given $100,000.

Not knowing what will happen to Prynne if he succeeds in planting the device, MacCauley initially refuses, but he learns that the longer he waits to accept the proposition, the more harm it will put not only his fellow passengers in, but also his family.

MacCauley must work against the clock in order to save his life, as well as the lives of everyone riding with him.