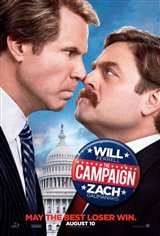 When a long-term congressman named Cam Brady (Will Ferrell) is humiliated publicly just before a new election, his CEO benefactors quickly jump ship and plot to supplant him. Their choice for a rival candidate is the unlikely Marty Huggins (Zach Galifianakis), the man who runs the local tourism center.

Despite his seemingly naive and ignorant demeanour, Huggins finds help in the form of Brady's former benefactors, a vicious campaign manager and his well-connected family, and is soon a legitimate contender for the seat. With the election looming ever closer and the two candidates locked in a bitter struggle for voter supremacy, the campaign trail becomes increasingly ugly, and no one is safe.