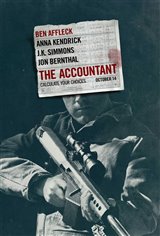 Even when he was a boy, it was clear Christian Wolff (Ben Affleck) was a math genius with an obsessive personality. He had a talent for numbers, but trouble relating to people. While a neurologist offered to help, Christian's dad declined the offer and put his son through rigorous training to prepare him for a harsh world.

Now grown, Christian works in a small town office, but that's just a cover. He's actually a freelance accountant who "cooks the books" for dangerous criminal organizations. When Ray King (J.K. Simmons), the head of the Treasury Department's Crime Enforcement Division, takes an interest in his activities, Christian takes on a legitimate client to throw them off.

His new client is a robotics company. Dana (Anna Kendrick), an accounting clerk who works for the company, has discovered a discrepancy involving millions of dollars. Before going public, they hire Christian to find the missing money. As Christian digs into the books and gets closer to the truth, bodies begin to pile up.