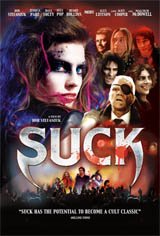 Don't miss the outrageous rock 'n' roll vampire spoof about a down and out band, The Winners, who will do anything for a record deal. When their disgruntled manager (Dave Foley) tells them that they are getting "long in the tooth," he doesn't know that his words are truly prophetic. During a road trip, their humdrum image radically changes when Jennifer (Jessica Paré), the bass player, disappears one night with a hip vampire (Dimitri Coats). She emerges with a sexually charged charisma that drives the audiences wild.

As the band members succumb, one by one, to bloodlust, their "gimmick" launches them into the limelight. Following an "incident" on a national radio show with "Rock'n Roger" (Henry Rollins), they hit mega-stardom beyond their wildest dreams. Joey (Rob Stefaniuk), the lead singer, is haunted by an eerie bartender (Alice Cooper), who turns out to be much more. Meanwhile, legendary vampire hunter, Eddie Van Helsig (Malcolm McDowell), is tracking them down, despite his fear of the dark. When a veteran music producer (Iggy Pop) calls them on becoming a vampire freak show, they begin to realize that fame is not what it's cracked up to be.

SUCK is a wild ride down a highway to hell, with a killer soundtrack that includes Iggy Pop's "TVeye" and "Success;" Alice Cooper's "I am a Spider;" Lou Reed's Velvet Underground's "Sweet Nuthin;" David Bowie's "Here Comes the Night" and The Rolling Stones "Sympathy for the Devil."