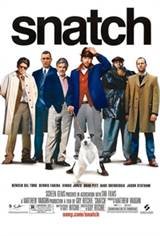 Watch Trailer   Movie Times
On his way to deliver a stolen diamond, Franky Four Fingers (Del Toro) decides to place a bet on an illegal boxing match while in London, England. Little does he know that Boris The Blade (Serbedzija) and a couple of pawnshop owners are planning to rob him of his goods at the bookies.

Meanwhile, two novice boxing promoters have their man knocked out by Mickey O'Neil (Pitt), a wildcard Irish gypsy boxer. The two decide to enroll Mickey to fight in their boxer's place and make a deal with the local kingpin, Brick Top (Ford), to fix the match. But when Mickey won't fall, the Brick gives the two one more fight to get it right.

In New York, Franky's boss gets impatient and sends Bullet Tooth Tony (Jones) to find Franky and the missing diamond.