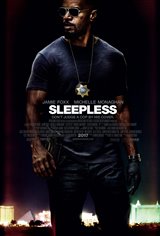 Las Vegas police officer Vincent Downs (Jamie Foxx) and his partner Sean Cass (Tip "T.I." Harris) have a shootout with drug runners one night. Having killed the criminals, the two corrupt cops steal the kilos of cocaine they were carrying. When the police arrive, they find a lot of dead bodies, but no drugs. In order to cover up their involvement in the crime, Downs and Cass volunteer to investigate the scene.

Their heist didn't go unnoticed, however. As Vincent is driving his teenage son to his estranged wife's (Gabrielle Union) house, masked thugs pull the car over and kidnap the boy, driving him away in a black SUV. Vincent gets a call from mob boss Stanley Rubino (Dermot Mulroney), whose cocaine Vincent stole. He tells Vincent he'll kill his son unless he gets his stolen drugs back. Vincent must risk everything – his career and even his own life – to ensure his son's safety.