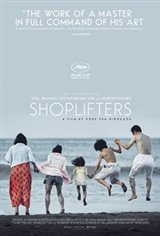 A family living in Tokyo survives mostly by shoplifting. Osamu (Lily Franky) and his young son Shota (Jyo Kairi) steal groceries, as well as things they can sell, while his wife Noboyu (Sakura Ando) works in an industrial laundry and takes anything left in pockets. Their teenage daughter Aki (Matsuoka Mayu) and grandmother (Kilin Kiki) have sketchy, although more legitimate ways to bring in money.

After one of their shoplifting sprees, Osamu and Shota come across a tiny girl named Yuri (Miyu Sasaki) all by herself in the freezing cold. They bring her home and find signs that she's been abused. Although Noboyu doesn't want to keep Yuri at first, when she sees the scars and bruises on the little girl, she relents. Soon the whole family is enamored of Yuri, whom they rename Lin. Shota is reluctant to teach his new sister how to steal. When she shows signs of wanting to take part in the family trade, Shota makes a decision that may change everything.

In Japanese with English subtitles.