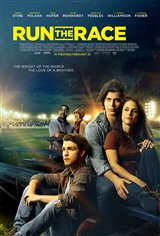 David (Evan Hofer), once a star high school quarterback, had his football career end when he took a hit to the head that left him experiencing seizures. Now, his brother Zach (Tanner Stine) is an All-State football player who's working to earn a college scholarship so he can get himself and David a better life and a ticket out of town.

The two boys have been alone since their mother died of cancer and their father (Kristoffer Polaha) abandoned them, turning into a drunk, so they both work evenings at their godmother's (Frances Fisher) grocery store to earn money to live, stocking shelves after hours.

However, when Zach is approached by a bully one night, he lets himself be goaded into a fight that leaves him with a devastating knee injury. Now sidelined, Zach has no hope of a scholarship and feels his future is over, so David decides to lace up his track cleats to get the scholarship that will change both their lives.