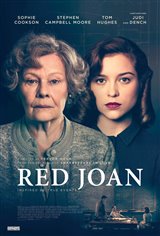 Retired librarian Joan Stanley (Judi Dench) is an elderly widow living a quiet life in the suburbs. When the death of a former colleague reveals Joan's ties to the KGB, the British Secret Service quickly arrest her. She's charged with providing classified scientific information including details on the building of the atomic bomb to the Soviet government.

As she is interrogated, Joan recalls the dramatic events that shaped her life. While a student at Cambridge, she was a shy young woman who excelled at physics. Her timid nature made her an easy target to be recruited by her Communist classmate Sonya Galich (Tereza Srbova) and Sonya's cousin Leo (Tom Hughes). When Joan asked to join a top-secret British programme to build nuclear weaponry, Sonya and Leo convince her to leak classified intel to Russia. Having fallen for Leo, Joan goes along with the cousins, betraying her country.

Based on the true story of Melita Norwood, as portrayed in Jennie Rooney's novel, Red Joan.