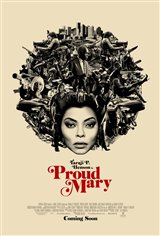 Hit woman Mary Goodwin (Taraji P. Henson) works for Benny (Danny Glover), a gangster who trained her to be an assassin and made her part of his crime family in Boston. Also part of the family is Benny’s son, Tom (Billy Brown), with whom Mary once had a relationship.

When Mary kills a gambler who owed Benny money, the dead man turns out to be the father of a 12-year-old boy named Danny (Jahi Di’Allo Winston). Feeling guilt about her part in making the boy an orphan, she keeps tabs on him over the next year and finds out he's living on the streets and delivering product for a ruthless drug dealer who goes by the name of Uncle (Xander Berkeley).

When Danny winds up up unconscious in an alley, she decides she finally needs to step up and help him. She takes him in, then goes to confront Uncle, but loses her cool and in the process, inadvertently starts a gang war.