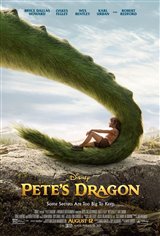 Pete (Oakes Fegley) is a boy who has been living in the woods for years. He hasn't been around humans, instead living a peaceful life with Elliot, the dragon who found him when he was four, and the other animals of the forest.

When a logging crew goes further into the forest than they had before, Pete becomes aware of them and is curious, not having seen humans for years. He spots forest ranger Grace (Bryce Dallas Howard), who's checking out the loggers to make sure they don't cut too deep into the woods, and steals her compass. Later, when the logging boss's daughter Natalie (Oona Laurence) catches a glimpse of Pete, she runs after him. She climbs a tree to get closer to the boy but a branch breaks and she falls. Her scream brings the adults running and Pete is hurt while trying to get away.

Grace takes him in temporarily as she tries to figure out where he came from. When he draws a picture of Elliot and claims the dragon is real, she goes to her father (Robert Redford) for advice. For years, he's been telling local kids about meeting a dragon living deep within the forest. Grace tries to get to the bottom of Pete's unbelievable story and his mysterious friend.