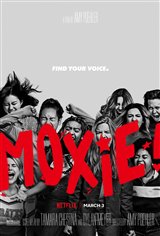 A shy 16-year-old girl named Vivian (Hadley Robinson) flies under the radar at her high school, where the boys put out a yearly list rating the girls. However, when she witnesses new student Lucy (Alycia Pascual-Peña) getting harassed by Mitchell Wilson (Patrick Schwarzenegger), the leader of the toxic male squad, she's forced to examine their unchecked behavior. Realizing that all the female students just put up with the unacceptable behavior of the male counterparts, she decides to do something about it.

Inspired by her mom's (Amy Poehler) rebellious past, Vivian anonymously publishes an underground zine called Moxie to bring about change and expose the wrongdoings at her high school.

Based on the bestselling novel by Jennifer Mathieu.