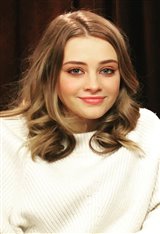 Josephine Langford was born in Perth, Australia and raised in the Perth suburb of Applecross. Her parents, Stephen and Elizabeth Langford, are both doctors. Her older sister Katherine Langford is also an actress, who made her breakthrough in the Netflix series 13 Reasons Why. Josephine studied from age five to 13 at the Ali Roberts Studio in Leederville. Josephine made her screen debut in the indie film Pulse (2017), which screened at film festivals. Her American film debut came the same year... See All