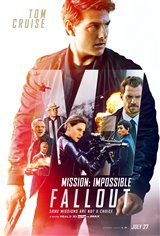 Watch Trailer
Ethan Hunt (Tom Cruise) and his IMF team, Benji (Simon Pegg), and Luther (Ving Rhames), are tasked with bringing down a terrorist who goes by the name of John Lark, and who works with 12 people who call themselves "The Apostles," in order to blow up major cities around the world, using nuclear power.

Alan Hunley (Alec Baldwin), who left the CIA and is now the head of the IMF, introduces Ethan to a CIA agent named August Walker (Henry Cavill), who's been ordered by his boss, Erica Sloan (Angela Bassett), to keep a close eye on everything Ethan does — because the CIA still worries that he's gone rogue. When Ethan and August go to find Lark and stop him, a number of things go wrong, but luckily they run into Ilsa Faust (Rebecca Ferguson), who again helps Ethan with his mission.

With Ilsa's help, Ethan manages to pose as Lark in an effort to meet White Widow (Vanessa Kirby) in order to find the three spheres of plutonium Lark plans to use to commit major genocide.