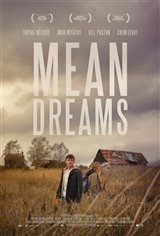 Jonas (Josh Wiggins), 15, struggles to cope with his family's financial issues and his mother's ongoing battle with depression. When he meets Casey (Sophie Nélisse) in the woods with her dog, he finds out she and her father Wayne (Bill Pullman) have moved in down the road. Jonas feels drawn to Casey and the two become instant friends.

Unfortunately, he soon realizes Casey's father is a violent, abusive man who, despite being a policeman, is involved in illegal activity. When Wayne tells Jonas he can no longer see Casey, the teen worries about Casey's safety with her violent father. He steals illegally obtained money from Wayne and goes on the run with Casey. With Wayne hunting for them (and for his money), they have to get far away from him or risk Wayne possibly killing Jonas for revenge.