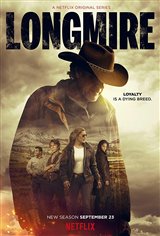 Widower Walt Longmire (Robert Taylor), the sheriff of Absaroka County, is still struggling to come to terms with his wife's death. His daughter Cady (Cassidy Freeman) urges him to turn his life around and run for re-election.

Longmire puts on a brave face and with the help of Vic (Katee Sackhoff), a female deputy new to the department, he gains a fresh outlook on his job. When ambitious, young deputy Branch (Bailey Chase) decides to run against him for sheriff, Longmire feels betrayed but remains steadfast in his dedication to the community. When he needs someone to confide in, Longmire turns to close friend Henry Standing Bear (Lou Diamond Phillips) for support as he sets out to put his life back together.

Based on the books by Craig Johnson.