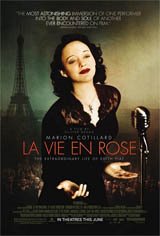 Born in the slums of Belleville, Paris, to a prostitute mother and a street acrobat father, Édith Giovanna Gassion received little formal education. By her early teens, she was a street kid, making small change by singing on the street corner. At 20, she was discovered by Louis Leplée, the owner of a cabaret who recognized her extraordinary talent and renamed her Edith Piaf.

Because of her diminutive stature and early stage nervousness, her nickname was “The Kid Sparrow” (La Môme Piaf). She recorded her first record, but when Leplée was found mysteriously murdered, she was accused of being an accessory. Not long after, legendary agent Raymond Asso took Edith under his wing and made her an international star. From New York, which she conquered in 1947, to Grasse, where she lived out her last days, the singer of hits such as “La vie en rose,” “Hymne à l'amour” and “Non, je ne regrette rien” lived life to the fullest. But she was never able to mend the wounds of her childhood, which she tried to anesthetize, for want of anything better, with drugs and alcohol.